In the last match of the regular twenty-fourth round of the Premier League, the Aston Villa players will welcome the Leeds team at their stadium, and try to get closer to the top of the table with a victory.

Aston Villa welcomes this match in eleventh place in the table with twenty-six separate points after twenty-one matches played. So far this season, they have achieved eight victories, two draws and eleven defeats, with twenty-eight goals scored and thirty-two goals conceded. At home, they recorded four wins and four defeats in ten matches, with two draws, and they managed to score seventeen and concede sixteen goals.

They currently have ten points less than sixth-placed Arsenal, and objectively have a minimal chance of securing participation in next season’s League of Conferences, but the latest reinforcements Lucas Digne and Phillipe Coutinho are clear sign that they will fight and do their best by the end of the season in that fight.

Leeds are close to the relegation zone as they have only six points more than the first team “below the line”, so they are facing a very uncertain continuation of the season. They are currently in the fifteenth position on the table with only twenty-two points won, and so far they have managed to record five wins, seven draws, and nine defeats. In terms of efficiency, they scored twenty-four and conceded forty goals, and are one of the worst defensive teams in the league in terms of the number of goals conceded.

They have scored two wins, three draws, and five defeats in ten away games, with eleven goals scored and twenty-three goals conceded, which is also one of the weakest defensive effects in away matches in the Premier League. If they do not solve their defensive problems, they can easily find themselves in the relegation zone very soon, so that every point they win in the continuation of the season is “worth its weight in gold”.

🤔 If you could relive one #LUFC goal at #EllandRoad, what would it be?👇 pic.twitter.com/T9Jxp6fQto

This will be their first duel in the Premier League this season. Aston Villa and Leeds have met several times in the past, and both teams have almost the same number of victories.

Aston Villa: Nakamba, Traore and Trezegeut. Bailey will most likely miss this match.

Leeds: Bamford, Cooper, Greenwood, and Phillips. There are great chances that Firpo will be out of the squad for tomorrow’s game.

Lucas Digne and Phillipe Coutinho are serious reinforcements for the Gerrard team, and they are players whose quality can completely “turn” the course of the game in moments when the team needs it. On the other hand, Bielsa has a lot of “personnel” problems, given that as many as four important players will be out of the squad. Leeds has a lot of defensive problems in away matches this season, as they have conceded as many as twenty-three goals in ten games, while Aston Villa has managed to score at least one goal in every game played at home.

Although it has been announced that Raphinha will be part of Leeds for tomorrow’s match, he still has problems with a minor injury he suffered during the last match of the Brazilian national team, and if he is not able to help his teammates tomorrow, Leeds’ chances to remain undefeated will be minimal. We expect Aston Villa to play offensively from the very beginning and reach at least two goals, which should be more than enough to win three new points. 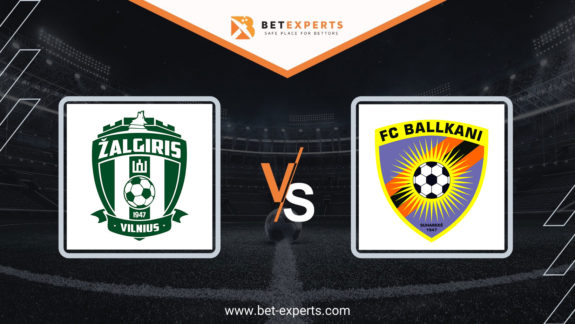 Zalgiris and Ballkani played 1:1 in the first match, so the return match in Lithuania…