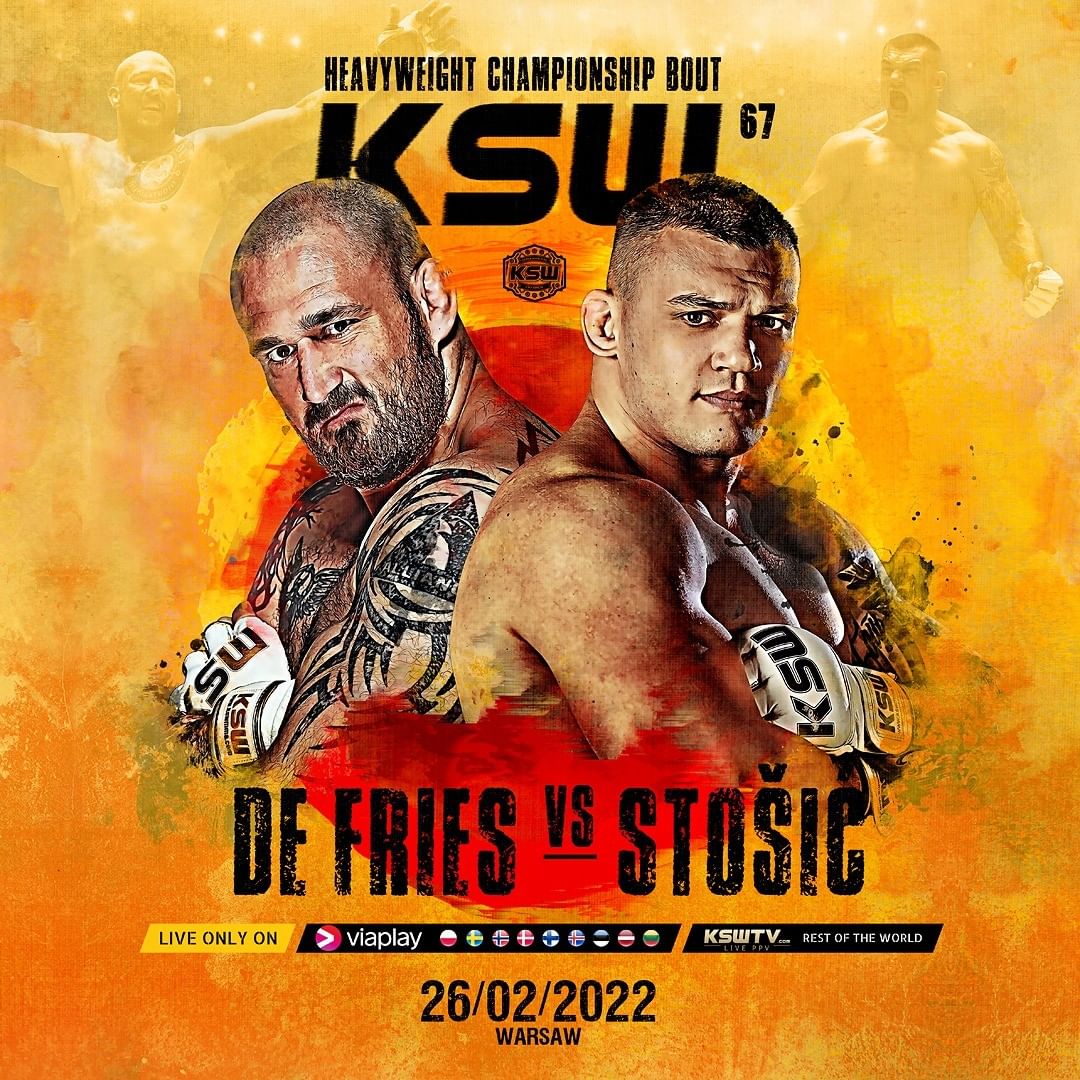 This weekend, the best European organization, KSW, organizes its event for the heavyweight champion. The event is being held in the Polish capital, and the main stars of the evening are longtime KSW champion Phill De Fries and Serbian guy Darko Stošić. The event in Warsaw starts on Saturday at 6 p.m. As usual, our experts have selected some of the most exciting fights for you, and on our site in the Picks section, you can read the analysis of those matches.

The most popular betting sites all listed the KSW in their offer, and if you register a new account at any of those recommended sportsbooks, you can get a lucrative Welcome Bonus for new customers.

De Fries has been the undisputed heavyweight ruler at KSW for five years now! His last fights seemed especially dominant, as he took the soul of every opponent. De Fries is an experienced fighter, he has fought in all major organizations, from the UFC, M1, Bellator, but he found his happiness and the right opportunity in the Polish KSW. In this fight, he will be almost twenty kilograms heavier than Stošić in the match, considering that he has approximately 120 kg, and Darko weighs about 103 kg. De Fries combines these physical predispositions with his grappling. When De Fries wins the position on the ground and lies down on the opponent, it is too difficult to take him off.

Darko Stošić has the opportunity to become the first champion from Serbia in one of the three most famous MMA organizations in the world. Darko’s primary discipline is Judo, which he has been using less and less lately, and lately, he focuses on his hand techniques. He is a very explosive and physically strong fighter. He has been in UFC for short, but luck and strong opponents weren’t on his side, and he lost three out of four fights. Now Darko Stošić fights again in the heavyweight category, and again he is showing his enormous talent. In six months, he had three fights, and he won all three and deservedly became a heavyweight challenger.

🇷🇸 @DarkoStosic92 can end the fight at any moment! #KSW67 pic.twitter.com/7ArZhzmRcO

Maybe the fight of the evening awaits us between Smielowski and Pejić. They are both very attractive fighters. The fight will be a 69kg catchweight because Pejić came in as a replacement.

Smielowski is undefeated so far, he is 8-0, and he ended all his fights very effectively, mostly with brutal KOs. He is very explosive and fast, he throws strong kicks. He also proved to be a great grappler on the ground, but he is primarily a stand-up fighter.

Pejic flew into this match on short notice and did his preparations with a teammate in Florida. He hasn’t been doing well in KSW lately, he has a 2-5 score, this is an ideal opportunity to return his score to 50%. It will not be easy, as the Polish fighter is good and strong. Pejić loves to control the distance, scores with entries and exits, but he doesn’t do very well on the ground floor. We will see if the popular Nitro has a solution against the dangerous Pole. Also, it will be interesting to see how the best betting sites will set the odds, but this could be a very interesting fight for the bookmakers.

One of the fastest KO’s in KSW history!