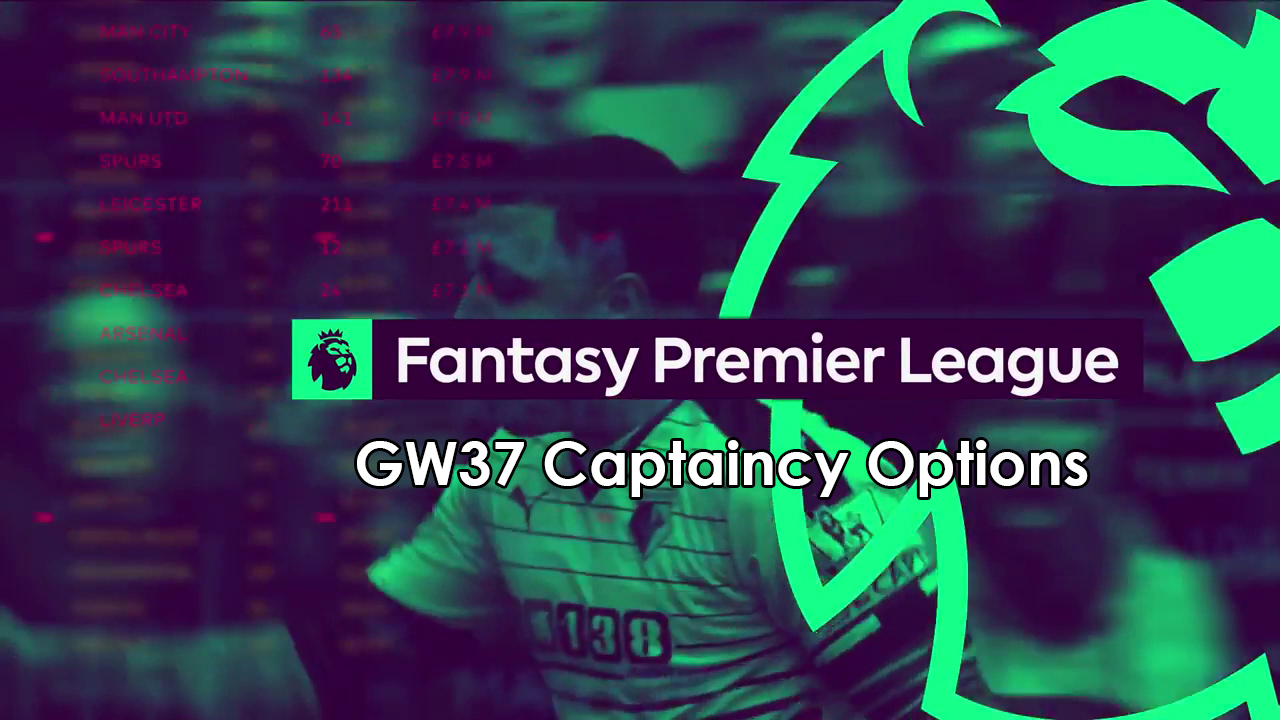 Captaincy is the single most important aspect of Fantasy Premier League. A captaincy failure will more often than not, ruin your gameweek, to the point of a red arrow. A good captaincy return can improve an average week, into one that is amazing, or change your gameweek from bad to somewhat decent, as we’ve seen throughout this 2021/22 FPL Season, and most recently in Gameweek 36.

The captaincy decision for Double Gameweek 37 has a few decent options but going against the crowd and effective ownership (EO) may just prove to be beneficial if you’re willing to go high-risk, high reward, particularly if you’re chasing in your mini-leagues or trying to achieve a specific overall rank, as we’ve seen in DGW36. Mohamed Salah was the standout captaincy option, with more than 180% effective ownership in the Top 10k – however, managers that weren’t happy with their rank or needed to make up ground, went differential and brought in Kevin De Bruyne with the aim of captaining him. After Manchester City’s exit from the UEFA Champions League, we had no idea how they would react going into Double Gameweek 36, which could see them either maul Newcastle and Wolves, or drop points due to the emotional and human aspect of football. The former happened, and if you brought in De Bruyne, he would’ve gotten you 30 points, scoring 4 goals and hitting the post as well against Wolves (with an assist against Newcastle in the first fixture), or 60 points if you captained him in DGW36. The points swing between captaining Salah and De Bruyne was 54 points, which opened up so many mini-leagues, and resulted in huge gains in overall rank.

Manchester City faces West Ham in GW37, which will be a tough fixture, as their defense will be weaker, with Dias, Laporte, Stones, and Walker likely to be missing. One could say that a win in this fixture will seal the title for Manchester City, which would see them go 6 points clear at the top of the Premier League table (since they play before Liverpool), and with a superior goal difference. Don’t let recency bias get the better of you. Yes, Kevin De Bruyne may likely get on the scoresheet or get an attacking return, but I do believe that there are 4 better options for captaincy in Gameweek 37.

In this article we will go through the 4 best captaincy options as mentioned above, and despite it being a Double Gameweek, only 1 FPL asset that plays twice, has made the list below. Let’s dive into it!

The most consistent FPL player, the highest owned player in the game, and the highest points scorer this season, Mohamed Salah has been given the boot by nearly 122 000 FPL managers at present. For some, it’s been an emotional transfer, after trusting him with the captaincy and Triple Captaincy in DGW36, scoring just 3 points in 2 fixtures. Salah was given an unexpected rest in Liverpool’s second fixture against Aston Villa, coming on to play 18 minutes (in which he almost immediately scored). Some managers are being reactionary, as Salah to De Bruyne is an easy transfer, based on recency bias. I just want to remind you that Salah is still fighting for the Golden Boot, and is just 1 goal ahead of Son. Salah thrives on being Top, either for his team with Liverpool winning trophies or by means of personal accolades. He wants that Golden Boot and I don’t foresee him being rested again this season. Liverpool trail Manchester City in points and goal difference. If Manchester City were to lose against West Ham, Liverpool would have to score a minimum of 4 goals against Southampton, which is not impossible. Be wary of selling Salah.

I do understand the logic behind it, based on his recent form, but just as recent as Gameweeks 33 and 34, Salah scored 2 goals and had 2 assists in those fixtures, before blanking twice. With so many managers losing faith in Salah, and will likely captain other players, who either play twice, Son, Kane or De Bruyne, Salah’s effective ownership will be much lower than we’ve become accustomed to. This may be an ideal opportunity to finally captain ‘The King’ that could result in big gains being made around you in overall rank and in your mini-leagues. Southampton has nothing to play more. Salah is a great captaincy option in my opinion.

Next up, we have the most in-form player in the Premier League, Son Heung-Min.

After yet another mega haul by Son in DGW36, scoring 2 goals and 1 assist against Liverpool and Arsenal, amassing 20 points, Son is a standout captaincy shout for DGW37 despite his single fixture. In the last 7 gameweeks, Son has blanked twice, but also had 5 huge double-digit hauls of 15, 12, 21, 19, and 20 points, scoring 9 goals and 3 assists as well. Son is the second-highest FPL points scorer this season, only behind Mohamed Salah. He was substituted earlier than expected against Arsenal, giving him sufficient rest time to be fresh heading into DGW37, much to his disappointment, as he is now just 1 goal behind Salah in the race for the Golden Boot award for the 2021/22 Premier League Season. Beyond personal achievements, Spurs beating Arsenal 3-0 in GW36, means that they’re well and truly still in this Top 4 race. Sitting just 1 point behind Arsenal to claim the final UEFA Champions League spot, Spurs will go all out against Burnley to ensure that they leave with 3 points.

With Tottenham likely to be going out all guns blazing against Burnley in Gameweek 37, that brings me to my next captaincy option, Harry Kane.

Son Heung-Min may be the Spurs player that we’re all breaking our teams, to bring, but Harry Kane has quietly gone about his business as usual. There is no Son goal, without Kane’s involvement in some way, either being the assister or the pre-assist. In the last 3 gameweeks, Kane has scored 3 goals and he is on penalties. Kane is also the designated penalty taker for Spurs, which increases his appeal. Gameweek 36 may have suited Son on paper, with tough fixtures against Liverpool and Arsenal, where Spurs would’ve relied on playing on the counter-attack, with Kane spraying balls in for Son to run in behind, but we did see a change once Arsenal went down to 10 men. The spurs didn’t counter, and that’s where Kane becomes a better asset in terms of goal scoring. He scored 2 goals, and with a fixture against Burnley in GW37, which may see Burnley defend deep at times, this fixture suits Kane more than Son in my opinion, and that’s why if you’re on a Free Hit, and can’t fit in De Bruyne and Kane, I’d be slightly more in favor of Kane, based on the importance of the fixture.

Last for captaincy, and the only man with 2 fixtures in Gameweek 37 to make the list of best captaincy potions, we have Richarlison.

Look out for more articles by myself (FPLijah). Key Notes and Lessons Midway Through DGW36, as well as GW37 Transfer Activity (whether we should invest or sell certain players) are other articles for the penultimate gameweek of the season. ‘How to Approach the End of Season Run-In’ is definitely worth a read as well, which is applicable for every Gameweek from now until the end of the season.

If you have any questions regarding your team or strategy or for more information regarding all things Fantasy Premier League, as well as maximum interaction, follow/subscribe to FPLijah on YouTube, Twitter, Instagram, and Reddit. 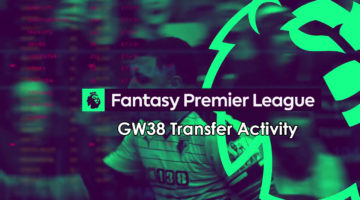 Written by: FPLijah Gameweek 37 was yet another gameweek that saw huge swings in terms… 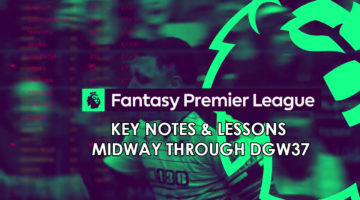 Written by: FPLijah  We are into the FINAL GAMEWEEK OF THE SEASON! A crazy season… 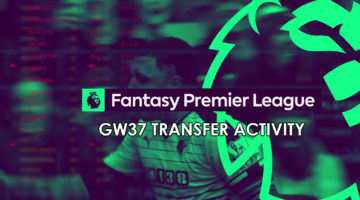 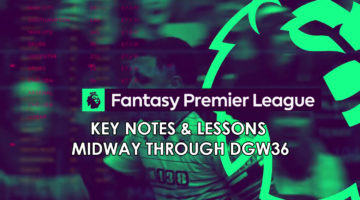 Written by: FPLijah  The biggest Double Gameweek of the season has already taken shape after… 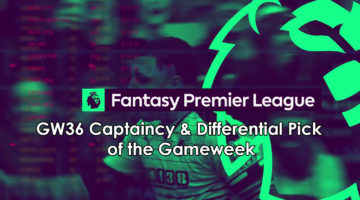 Written by: FPLijah Captaincy is the single most important aspect of Fantasy Premier League. A… 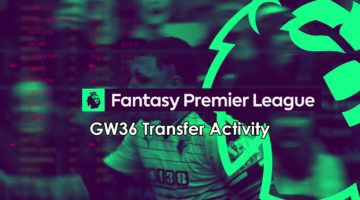 Written by: FPLijah The biggest Double Gameweek of the season is upon us, with many…